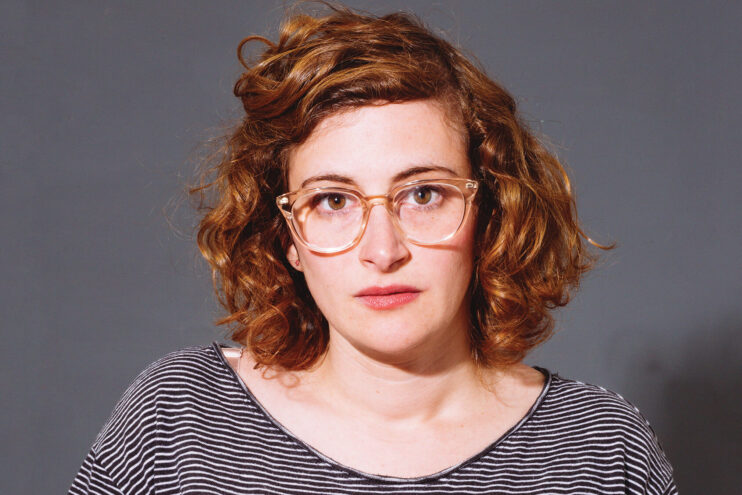 How does one describe comedian Jo Firestone? Kady Ruth decided on “delight” and Alise chose “supernatural.” And surely there is some German word that is untranslatable into our garbage language that means “force of performance nature who brings an unfathomable joy to comedy.” Based in Brooklyn, New York, Jo Firestone is the king of dreaming up bizarrely entertaining shows (often with chances to win something, sometimes that “thing” is a date.)

She is the host of Dr. Gameshow on WFMU, the co-host of Punderdome 3000, a celebratory pun competition she hosts with her father, one of the people behind The Incredible Gameshow Showcase at UCB, and the matchmaker extraordinaire for Friends of Single People. These are just four of the shows that she is involved with, and a whole bunch more of her projects and fantastical performances can be found on her website.

Having seen a slew of Firestone’s shows at this point and being lucky enough to participate in a few, what truly makes them magical is her ability to host them while projecting the same amount of wonder the audience feels. You can tell she is just as captivated by the energy and excitement happening on stage, but she has the strategic shrewdness to direct and dream it up.

Of course, her playfulness on stage shouldn’t be mistaken for whimsical luck or anything that’ll rob her of all the credit she deserves in putting these masterpieces together. Firestone’s incredible talent to enamor the room is both her brilliant conceptions for shows and her remarkable ability to pull the audience into these world’s she’s creating, and comfortably so.

The first time I (KR) saw her perform, she successfully managed to make everyone in a skeptical audience to do a full dance to Bonnie Tyler’s “Total Eclipse of The Heart”. That is a very special and incredibly hard thing to do.

Jo Firestone is a national treasure and if you have the opportunity to see her perform, you got to do it. End of discussion. Here are some questions we asked Jo, and she graciously took time out of dominating “da scene” to answer them.

THE LE SIGH: When was the first time you remember getting a laugh?

JO FIRESTONE: I was in 6th grade and we were doing the play “Charlotte’s Web”. I played a rival pig to Wilbur and I think I just shouted all my lines, and for some reason the audience laughed. I didn’t understand why they were laughing, but it definitely got me in the habit of shouting my lines in every play I was in for the next 4-5 years.

TLS: Did you have a funny family growing up?

JF: I did! I still do! My dad spent a lot of dinners doing Rodney Dangerfield impressions for us (we hated this), and my brother is very funny, although he might not know it. My mom is definitely the most underrated though. One time, my dog got arthritis and she called it “ARFritis” for like a year and no one ever laughed but she kept the bit going.

TLS: What is the best/coolest/funniest thing you’ve ever seen on stage?

JF: One time I saw someone push a chicken egg out of her vagina. It was horrible at the time, but in retrospect it’s endless laughs.

TLS: What’s your process like for writing your shows? Do you sit down to work or is it more like scribbling notes on your arm on the subway?

JF: It’s definitely more like scribbling notes on my arm on the subway. My arm, or some napkins, or sandwich paper. I think this is why I always get bugs in my house. I’d say most of my stuff is written on food trash.

TLS: Do you think Amanda Knox did it?

TLS: What is the worst movie you’ve ever seen?

TLS: What is your ideal power outfit?

Learn more about Jo Firstone on her website here.

THIS STAFF POST WAS CONTRIBUTED BY:
Kady Ruth Ashcraft is a comedian and writer. She writes about what’s happening in the news for Funny or Die, and performs standup and improv comedy around town. Check out her work at www.kadyruth.com.

Alise Morales is a comedian and producer based in Brooklyn, NY. You can see her on Lloyd Night every other week at UCB East and monthly at The Annoyance Theater.