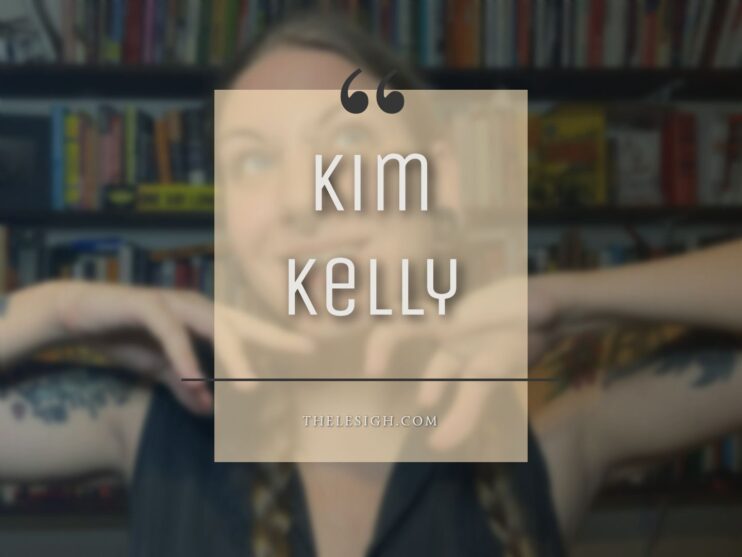 Back when I was in high school, my friends joined forces to form a black metal group called Doorway to Norway. In a strange twist of events, they became the most popular local band for a mostly-conservative suburban town in New Jersey (they won the battle of the bands twice!). I should be more specific though – Doorway to Norway only consisted of my guy friends.

Even though I had more knowledge about Mayhem and Sunn O))) than the average person, metal felt like something that was “their” thing, so I never even tried to join in or learn as much as them. This plays into grander imbalanced gender stereotypes in music but feels extra amplified since metal and hardcore are such classically masculine genres. Metal music journalist Kim Kelly also faced this issue when she was younger, but instead of giving up, she became a million times more dedicated to knowing her shit and it definitely paid off.

Kelly, who is likely best known for her work at Vice, is truly a trailblazer. Not only has she become one of the most prominent writers of the genre, she also has brought underground metal coverage to the forefront of music journalism. Kelly originally worked her way up from reviewing albums for her local county paper to most recently debuting the show Noisey Shreds, where she interviews/hangs out with legendary bands like Slayer and Kvelertak.

I recently had the chance to see Kelly moderate a panel on the topic of women in metal. One moment that truly stood out was when the group passionately, resoundingly agreed that Kelly was one of the most influential women in metal herself. Because of Kelly’s perseverance and talent, the future looks a little brighter for anyone who worries that metal is just for dudes. A little while back I was able to ask Kelly about Noisey Shreds, the women who inspire her, and what she has in common with Kim Kelly of Freaks and Geeks fame.

The Le Sigh: When I was in high school, a lot of my guy friends were into metal/hardcore / etc. but it always seemed like they treated it as exclusively “for guys.” Did you struggle with this when you were growing up?

Kim Kelly: Yep! It’s not just a high school phenomenon, either; there are adult men out there who still somehow struggle with the idea that women and non-binary folx are genuinely interested in metal. It’s not something I have to deal with much anymore now that I’m older and have spent the past 14 years working in metal, but when I was in high school, I definitely had to deal with dudes my age (and older) coming up to challenge me on my metal knowledge and dedication—to gauge whether or not I “deserved” to be there. It was exhausting and demoralizing, but it helped strengthen my resolve to make a place for myself within the metal world. I’ve always had that bratty “You don’t want me here? Fuck you, I’m coming back every night!” mentality.

TLS: On that same note, I did have one English teacher who was super into metal (she walked down the aisle to Slayer!). Were there any women in metal who inspired you when you were growing up? Who do you look to for inspiration as an adult?

KK: That’s so rad. I was in absolute awe of women like Liz Ciavarella-Brenner (with whom I got the chance to work as an intern while she was running Metal Maniacs), writers Jeanne Fury and Zena Tsarfin, Paula Hogan at Candlelight Records, Loana dp Valencia at Nuclear Blast, photographers Samantha Marble and Justina Villanueva, and of course musicians like Angela Gossow (Arch Enemy), Doro, Jinx Dawson, Gallhammer, Chiyo Nukaga (Noothgrush), and Jo Bench (Bolt Thrower). Now, I look to my friends, colleagues, and musicians who are out there creating inspiring, challenging art—Kayla from Bleed the Pigs, Kristina from King Woman, Madison from Cloud Rat, Lesley and Caryn from Mortals, and the agit-punks in Material Support leap to mind, but there are so many others, too!

TLS: When was the turning point in your life when you decided to write about music? What was the first piece you wrote about?

KK: I’m extremely lucky in that writing has always come naturally to me; my grandma taught me to read when I was three, and I spent whatever bits of my childhood that were leftover after soccer practice and crashing around in the woods to devouring every book I could get my hands on. I started writing about music on a whim, when I was 15; at the time, I was writing for the “teen voices” section of my county newspaper, The Burlington County Times, about politics and sports. One day, my editor tossed me a metalcore CD and asked me if I wanted to review it. I gave it a shot, discovered that writing about music was way more fun than covering track meets, and haven’t slowed down since.

TLS: You’ve been writing about a largely male-dominated genre since you were a teenager – what was it like when you first broke into writing about metal? How has it changed or progressed as you’ve gotten older?

KK: Back then, there weren’t a lot of women or non-binary folk writing about metal that I knew of, and I formed fierce bonds with the few I did meet. For awhile, it felt like it was us against the world. It was a lot tougher to be a young woman in the metal business (and in the metal scene in general) in 2006 than it is now, but there are still issues in the scene that need addressing and barriers that need smashing. Sexism and misogyny (to say nothing of homophobia, transphobia, anti-Semitism, and racism) are an ugly blight on our community, and I’ll always stand with those who are working to eradicate those poisons once and for all. Metal truly is a more inclusive, welcoming place now, though, and I really hope that more women and non-binary folx start writing about metal, because those voices are so incredibly important and necessary (now more than ever). I was lucky enough to have a few older mentors when I started out who helped me learn the ropes and navigate the often treacherous waters of the metal industry, and I would love to be able to pay it forward. Email me!

TLS: How did the idea for Noisey Shreds develop? What’s it been like transitioning from print to recording video interviews and putting together a show?

KK: It’s weird! And scary! It was certainly a challenge, but one I welcomed as an opportunity. It’s very strange to go from typing away on your couch in your pajamas at 2 AM to standing in front of a camera worried about whether you look okay or your voice sounds odd or you flubbed a line or any of the thousand and one things you need to remember when shooting video. Luckily for me, the producers I worked with are total pros and guided me through the entire process (and worked a lot of magic of their own to pull everything together and make it look good) and together we came up with a final result that I’m really proud of and happy about.

TLS: Who would be your dream guest for Noisey Shreds? What would you do with them?

KK: I really wanted to take Cloud Rat down to Coney Island to ride the rollercoasters and drink ridiculous boardwalk margaritas, but we couldn’t get the scheduling to work out. Someday!

TLS: Has anything wild or unexpected happened while filming the show so far?

KK: Wandering through a Florida swamp looking for alligators after I interviewed Obituary was a trip—especially once we found some!

TLS: Since The Le Sigh focuses on female-identifying and non-binary artists, what are some bands or artists you would recommend to TLS readers?

TLS: What artist or band would readers be surprised to find out that you were a fan of as well?

TLS: I have to ask – do you have anything in common with Kim Kelly of Freaks and Geeks fame?

KK: We’re both tall, blonde, and blue-eyed, with a sort of “rocker” aesthetic, a quick temper, and (once you get to know us) a big heart, so I don’t mind sharing Google results!

Check out thelesigh.com for more interviews and artists.