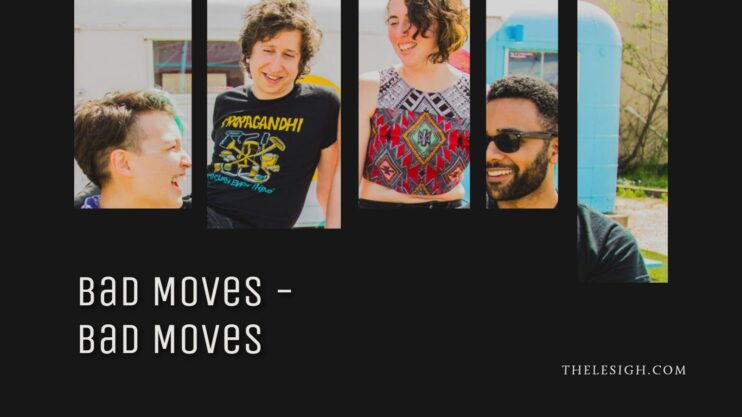 Bad Moves, the D.C. power-pop-rock supergroup, released an EP in early December that was an obvious response to recent political events. But they also addressed pressing issues that can be considered more nuanced, such as holding shitty jobs, gender conventions, and growing up in suburbia. The opening song, appropriately titled “Shitty Tomorrow,” is a boppy tune with a bittersweet message; “keep on working for a shitty tomorrow.”

The layered vocals delivering a singular message gives a reassuring sense of unity to listeners, who may recognize that we don’t have to face this scary future alone. “Shitty Tomorrow” has all of the makings of a protest song as it stresses the power of solidarity and uniting to express dissatisfaction.

Its anti-authority message is clear; “Every cop on the beat…gonna sing me the praises of a shitty tomorrow,” Bad Moves declares, as they refuse to be silenced by the figures in power who are trying to “take it all.” It, of course, meaning everything from affordable healthcare to environmental protection to basic human rights for many minority groups. Even though Bad Moves emphasizes the challenges and hardships on the horizon, they still encourage activism when they urge to “keep on working…we’ll carry the load if you give us a shot.”

Following track “Drain Me” gives off an early sixties vibe with a pulsing bass line and “Drifters”-esque drumbeat. The retro style reflects the nostalgic message of the song, which details feeling unfulfilled and lost in big cities along with your hometown. The narrator holds on to childhood possessions, drawings, and “things that [they] should have thrown away.”

They let these objects represent the weight of old memories and traditional values that make them feel trapped. “I still daydream about being a woman,” the narrator confesses, as they struggle to break the gender conventions that they were likely raised to follow. Like those of us who were brought up in conservative homes, it can be a struggle to move past those oppressive ideals, as they “could feel the road tugging against the anchor of family.”

They want to be able to follow their own path, but they are too drained and burdened by their past experiences. “It’s just something underneath everything,” the narrator sighs, tucking their hopes of expressing themselves beneath all the doodles and toys that they boxed and stored away.

“Get Slow” is the third song on the album, and Bad Moves’ group vocals return with beautifully executed harmonies. Their combined voices give off an intimidating affect, as they say “get slow with us,” until the listener feels the peer pressure to become complacent.

The band repeats the phrase “being no one isn’t so bad” to poke fun of people who are willing to ditch their dreams. The EP wraps up with a fast-paced tune featuring two of the vocalists fiercely sounding off about feeling frustrated and trapped in dead-end jobs. There’s an intense and chaotic call-and-response that imitates the helplessness they feel.

They recall “working nights for some old businessman who couldn’t give a second shit about [them],” and it’s obvious that they’re too ambitious to be trapped in an office job. At first, it seems they’re too drained from all the denial and disappointment they faced while trying to follow their teenage plans that they can’t get themselves out of this rut. But at the end of the song, they begin to take back control of their lives and find themselves “on the verge of something” better than all the muck they’ve been stuck in.