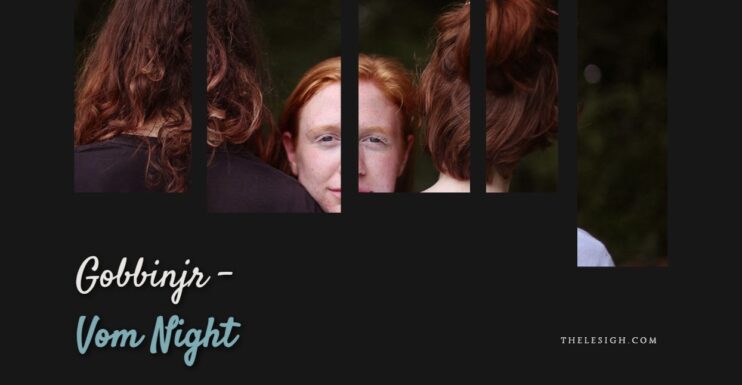 There’s something really, really painful about realizing how much love you have and how little people seem to care. I can recount, albeit incredibly clichéd, the number of times I have felt this melancholy feeling. In line at grocery stores, walking home alone after a night of going out, in libraries (Them: “Can I borrow your laptop charger?” Me: “Haha sure also do you want to date me?”). In Gobbinjr’s (aka Emma Witmer’s) new EP vom night, there’s this sense of relentlessly pure, unreciprocated love that intricately shines through every line of every song.

vom night, Gobbinjr’s second official album, runs less than 20 minutes. In that very short time, Witmer lets us into her world and lets us see what it’s like to be embarrassed to love and feel tingly all over. In “Undies,” Witmer starts the song in a whisper, “You make me sad to say / June is only 30 days.” The intro is waltz-like as if it would be fitting for a soft slow dance. At the midpoint of the song, the time signature changes and transforms into something brighter and dance-able in a totally different way than its sock hop-Esque predecessor. In the titular “Vom Night,” Witmer laments, “No one wants to love someone who has never been loved before.” And in an all-too-real moment later she sings, “I’m a vacuum-sealed freezer dinner rotting in the box / Before it had a chance to get hot.” It’s drenched in woozy textures of synth as Witmer sings in her creaky soprano. It’s a song that, like the rest of the album, feels cased in glass. It’s like watching the inside of a Christmas snow globe with little pieces aimlessly floating around inside, and like little toys moving but with no real destination at the end of the day. Everything moves but it’s still somehow static.

Witmer’s storytelling is kind of like that; it’s freeze-frame songwriting, with each song working as a thought fragment. One of the most truly earnest tracks on this album is closer “Firefly,” where Witmer shares how “creepy” she feels for liking people more than they probably like her. Sonically, the track is sparse – Witmer’s impeccable baroque pop skills are met with a simple drumbeat. The song is as genuine as it is just loaded in dark humor (“I just want to be a firefly / I just want the human race to die.”) That humor can be found in every track of vom night.

The second Witmer worries that maybe she’s taking life and love a little too seriously, she complicates it with little quips about wanting to be a manatee. vom night is a gooey and magical twee pop companion to life. It’s an earworm that you can take anywhere with you: on the bus, walking to and from class, while stuffing your face with a bag of Cheetos. Witmer’s undeniable talent that has just grown in the year makes the album. This is more than just simple DIY pop melodies; it is a gorgeous, sonically diverse record that will tug at your very heart strings.